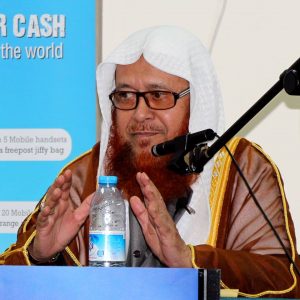 Sayed Kamaluddin ‘Abdullah Zafree was born on 5th March 1945 in Bhola, Bangladesh. He is an orator and public speaker on Islam. He completed Qamil from Dhaka Alia Madrasah and further studied classical Arabic at Makkah Ummul Qura University in the Kingdom of Saudi Arabia. He is a teacher by profession.

He founded Jamea Quasemia, Narshingdi in 1976 – his first institution. It is now considered one of the most prestigious madrasahs in Bangladesh. He founded many educational institutes (amongst them several schools, madrasahs, an orphanage, a college and a university). The latest addition was Bangladesh Islami University (BIU) – a non-profit Islamic University established in 2006. It was the materialization of a long cherished dream of Shaykh Zafree. He is serving as the Chairman of Majlis Al-Umana (Board of Trustees) of Bangladesh Islami University. 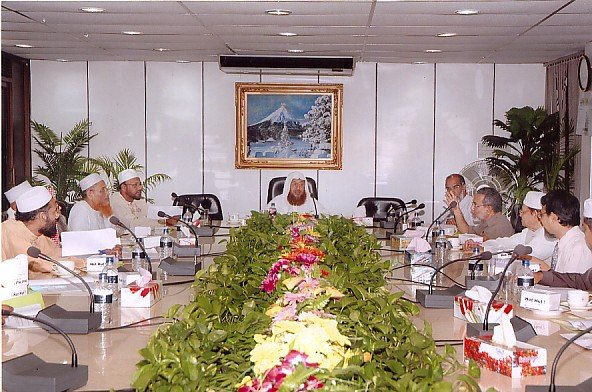 Shaykh Zafree at a meeting Shaykh Zafree, by the grace of Allah Subhanahu Wa Taala, has been active in the field of da’wah for over 40 years. He is working to the message of Islam using the Holy Quran and the authentic Hadith of the Prophet (pbuh). He has delivered hundreds of lectures around the globe. Many of them are available in CDs and DVDs. Countries he has visited for da’wah include Saudi Arabia, USA, France, Germany, Finland, Austria, Netherlands, England, Switzerland, Greece, Canada, Kuwait, Qatar, Bahrain, Egypt, Algeria, Libya, UAE, Malaysia and many more.

Shaykh Zafree is also active in the world of Islamic economics for almost two decades. He has played a significant part in finding the solutions of problems faced by the first Islamic Bank in Southeast Asia – Islami Bank Bangladesh Limited. He is the Chairman of the Central Shari’ah Board for Islamic Insurances in Bangladesh and a member of the Central Shari’ah Council for Islamic Banks in Bangladesh. Around a dozen Islamic financial institutions, in Bangladesh and UK, including banks and Insurance companies have been privileged to have him as Chairman of their Shari’ah Council/Board.

He appears on TV regularly. His weekly live question and answer program, Islami Sawal O Jabab, on ATN Bangla has become very popular among Bangla speaking people around the globe. The channel also airs his tafsir and Jumah khutbah. At present he also serves as the khatib of Uttara Central Mosque, Dhaka.